The following information is based on research and interviews from various individuals as well as my own communications with non-indigenous beings. Please refer to prior postings at this site, as well as at http://cosmicparadigm.com/Athabantian/, for more details.

Based on the increased number of UFO sightings around our planet, there is an excitement about our brothers and sisters from the stars making themselves generally known in the physical. This is commonly known as “First Contact.” Associated with First Contact is the whole subject of “Disclosure.” This commonly means that the government of the United States finally admits that contact with our brothers and sisters has happened and that it is real despite repeated denials.

It is my opinion that such Disclosure is unlikely to happen at this time because it would open the way for FULL DISCLOSURE (see below), and few within the government or their affiliated corporations are ready for that. It is also my opinion that relatively few within the government, or the affiliated corporations, know the complete picture as described below.

It is my further opinion, substantiated by the opinions of others, that we will see Disclosure only after monetary systems fail and after governments are remade to operate in the best interests of all on this planet. In other words after a shift from this 3rd dimension paradigm to a 4th or 5th dimension paradigm. Although this could happen quite soon, 3rd dimension devolution dictates that open contact with our brothers and sisters is most likely some time away.

My definition of FULL DISCLOSURE is as follows:

1.     Admissions that sightings of UFOs cannot be dismissed as natural phenomenon, as swamp gas, or as weather balloons; admitting that some of these sighting are the result of contact with off-planet civilizations.

2.     Admissions that there have been crashes of off-planet craft. Plus admissions that agencies of the U.S. government, and affiliated corporations, have successfully undertaken reverse engineering of technologies acquired from such crashes.

3.     Admissions that this reverse engineering has resulted in flying disks and other craft with capabilities beyond air and space craft as revealed to the general public, and that these craft are responsible for the vast majority of UFO sightings.

5.     Admissions that one of these projects is assistance from off-planet entities to develop advanced spacecraft, and that these craft are capable of flight to other planets. Admission that the conventional military technology is second to the technologies possessed by off-planet beings and these secret projects.

7.     Admissions that experiments to develop hybrid beings — based on manipulating the genetics of humans and off-planets entities — have been carried out. Further admissions that the majority of “alien abductions” are in reality abductions of humans by other humans to participate in these experiments.

8.     Admission that there are off-planet entities who do not have our best interests at heart, and that they are behind the Illuminati.

9.     Admissions that there are advanced beings living under the surface of the Earth and within its core, and that these beings are benign.

10.  Recognition that the vast majority of off-planet beings are benign, that they function in a higher dimension, and that they wish to assist the transformation of this planet into a veritable paradise based on love — counter to the current fear-based society presided over by the U.S. and other governments. Further recognition that there are millions of off-planet beings currently among us.

I am grateful to be involved with messages such as this one, and trust they are of value to those of you reading them.

In truth, Love and Joy,

1.Check out my most recent posting at Athabantian: http://cosmicparadigm.com/Athabantian/

2. I gave a talk in Pagosa Springs, Colorado on January 7th. I believe it will answer many of your questions. Check it out at YouTube (In several parts): http://www.youtube.com/watch?v=VNRGntVgSGU&feature=related

3. You may donate to my efforts by clicking on the “Donate” button at the left. Many thanks to all who have contributed.

4. My three books of the Paradigm Trilogy, “Trillion,” Decimal,” & “One,” are now available on Kindle at Amazon.com

5. The following book, “Transformation,” is available as an electronic book only at: 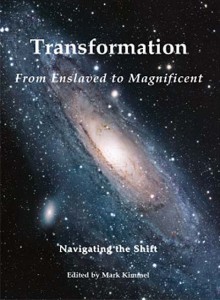 Two years of Mark’s Corner organized by topic and author — all in the original words of Bren-Ton, Moraine, Justine, Adrial, and others.

For only $3.95 you can download the book to your computer where you can either read it at your leisure or print it out. To order, click on the image in the right hand column.